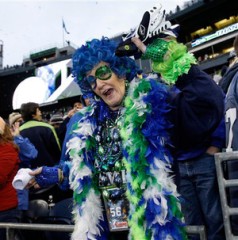 Thank you for following 12 Days of the 12th Man.  How would this countdown be complete without mentioning the most loved, and famous 12th Man of all. For starters, let me just set the record straight, yes a woman can be a 12th Man, and we don’t have to change what we call it. You are not a 12th Woman, unless we are saying it to be funny, male or female you are all the 12th Man. It’s a universal term like ‘mankind.’ I wanted to make that clear because the most famous 12th Man on the planet is actually a woman. That fan would be 83-year-old Patti Hammond, or as she is more affectionately known, Mama Blue. A season ticket holder since day 1, Mama Blue has become engrained in Seahawks history. It can take her hours she says to get from her personal parking spot outside the stadium to her seats because of all the photo requests and people wanting to stop and chat with the Seahawk icon.

Mama Blue was inducted into the NFL Hall of Fame in 1999 for being the Seahawks superfan, and she also became the first fan to raise the 12th Man flag in 2007. Those accomplishments aside, she may brag most about sneaking a kiss on Russell Wilsons cheek. Thank you again for following 12 Days of the 12th Man by nwsportsjunkies, All hail the Queen of 12th Man Nation, Mama Blue! Go Hawks!

« May the Best Team Win…
Super Bowl: A Day To Remember »