Well I must say that the friendly match this past week sure had its ups and downs. It was simply amazing watching the European Champions move the ball around the pitch. There touches were crisp and accurate. When the match started and then soon thereafter they had two goals in the matter of 12 minutes. I was having flash backs to the Manchester United game. I was really impressed by how the Sounders kept their chins up and battled back too put two goals in the back of the net by FredyMontero. Then it went downhill from there. Chelsea FC was able to score two more goals before half time. 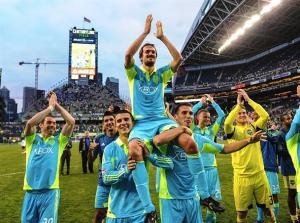 One thing I was happy to see is Sigi Schmid put a respectable lineup on the pitch for the second half. Last year during the friendly it was David vs. Goliath. It was nice to see some reserve players get playing time along the starters. It was also a wakeup call to management I hope that some of our defenders need to pick up their game. We kept getting burned into the inside of the penalty box instead of pushing them to the corners. Don’t give them the open shot on goal.

The best part of the match was when Roger Levesque was substituted onto the pitch for his final appearance in a sounder uniform. It was kind of a shocker for me when he announced his retirement half way through the campaign this year. He will be missed by players and especially fans. He brought a sense of happiness to everyone. There was never a dull moment. The man always had a grin from ear to ear. I will never forget last year when Roger stole the ball from the keeper and did his scuba dive drop over the scrolling banner after sinking it in the back of the goal. Instant classic in my books. Roger you will be missed and enjoy the next chapter in your life.