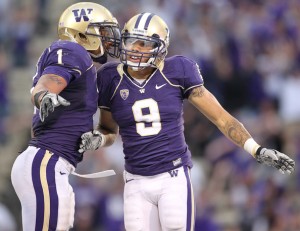 The University of Washington can be proud this year after sending 5 new players to the NFL this weekend. Two players made the league via the draft, defensive tackle, Alameda Ta’amu (109th overall) and  offensive lineman, Senio Kelemente (151). Jermaine Kearse, Devin Aguilar, and most surprisingly, Chris Polk, were signed as undrafted free agents.

Alameda Ta’amu was drafted 109th overall by the Pittsburg Steelers. The Steelers hope their new 348 pound nose tackle will fill the shoes of Casey Hampton, whose future is uncertain due to a third major knee surgery. Ta’amu is force in the middle. His ability to shut down runs up the middle and ability to beat the double team are almost unmatched by anyone coming out of the draft. He was highly rated as a defensive tackle but slid down to the 4th round due to his lack speed and pass rush capabilities. He’s a perfect fit in the Steelers’ defense, however, so this seems to be quite the steal for them.

The Arizona Cardinals selected Senio Kelemente in the 5th round. Kelemente is a consistant, versital player who will add depth to the Cardinals line along with 4th round pick, OT Bobby Massie. He shows great quickness getting to the second level and posted the fastest 20-yard shuffle time (4.58 seconds) at the NFL combine. His only drawback is getting off-balance and beat around the outside.Though Kelement finished his college career as a tackle, he is projected to play guard in Arizona to help combat this weakness.

After the draft, the Seattle Seahawks signed UW wide receiver, Jermaine Kearse. Kearse will hopefully add depth to the inconsistent receiving core. Jermaine led the Huskies in 2010 with 1005 yards on 63 catches, 12 for touchdowns. His production tailed off in his senior year but that could be due to the future NFL talent of Kasen Williams and Austin Serferian-Jenkins sharing receptions. He has what most say is “second-round talent” but seems to be a little inconsistent himself. He has great athleticism and great ability to get to ball. Though he shows flashes of greatness, he has struggled all through college with dropped balls. If Pete can keep Kearse focused, he could be a great addition to the Seahawks.

The Tennessee Titans also looked to add depth at wide receiver with the signing of UW receiver, Devin Aguilar. Although he didn’t post any real impressive measurables, Aguilar has always had the big play potential. Also, with the Jake Locker era nearing, reuniting the two players could jumpstart both of their careers.

In one of the most surprising stories this year, Chris Polk went undrafted and later signed with the Philadelphia Eagles. Polk was undoubtedly one of the most talented running backs in the draft but slipped through the drafted due to health concerns. He has had injuries to both shoulders and a knee thus far and also combatted rumors of hip issues. Even through his injuries, Polk rushed his way to the record books. He’s one of only seven players in Pac-12 history to compile 4000 career rushing yards. Polk also holds the record for most 100 yard games (21) for the University of Washington. On top of his stellar rushing stats, he has also proved to be a weapon as a receiving back. If he can stay healthy, this could be the biggest steal in the draft this year.